The MENA community lost a beloved member last week when the dramatist, critic, author, diplomat, columnist, and teacher Riad Ismat succumbed to COVID-19 on May 13, at the age of 73.

Riad was our very first MENA Monday speaker: he inaugurated our flagship lecture series on October 7, 2013, with a talk on “Currents in Syrian Theater” — a subject on which he was a true authority. He served as Artistic Director of the Damascus National Theatre and as Rector of Syria’s Academy of Dramatic Arts. He directed more than 15 plays, including productions of Sophocles, Shakespeare, Tennessee Williams, Arthur Miller, and Ariel Dorfman in Damascus. He also directed his own adaptation of The Arabian Nights. Riad’s energetic involvement in the Republic of Letters took him to theater and literary festivals in Lebanon, Iraq, Tunisia, Libya, Sudan, Palestine, and beyond.

He was a prolific author. His staggering 35 books (in Arabic) included the plays A Game of Love and Revolution, The Banana Republic, Searching for Zeinobia, and Mourning Becomes Antigone, and works of literary and dramatic criticism such as The Arab Theater, The Tragic Hero on the World Stage, The Devil of the Theater, Sound and Echo: A Study of the Modern Syrian Story, and Naguib Mahfouz: Beyond Realism. He also wrote short stories (he was awarded the Best Arabic Short Story prize from Germany’s Deutsche Welle) and television scripts. 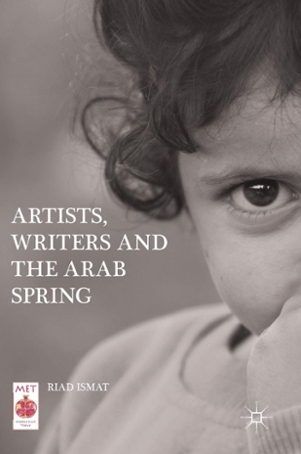 Riad also held various government posts in Syria: General Director of Radio and Television, Ambassador to Qatar and Pakistan, and Minister of Culture.

Riad came to Northwestern in 2013 via the Scholars at Risk Network. He wore different hats on campus: he was a Visiting Scholar with the Buffett Institute and taught courses in the departments of Theatre, Performance Studies, and Radio/Television/Film. He was a regular at MENA events — not only MENA Monday lectures but our many film screenings and discussions at the Block Museum. He was an especially engaging and intellectually generous audience member: he routinely prefaced his questions with praise for the speaker, and his questions always pushed the conversation in fruitful directions.

Below are some reflections on Riad from Northwestern faculty, staff, and students.

Shayna Silverstein (Assistant Professor in the Department of Performance Studies and a faculty member of the MENA Program):

It is difficult to understate my respect and admiration for Riad. There are few who have negotiated success with such graciousness and humility, and even fewer who could weather the political circumstances that he endured with such patience, trust, modesty, and conviction.

We had the opportunity to teach performance studies together during his time at Northwestern. Students expressed their deep appreciation for the individualized attention and depth of approach that they received from him, as director and pedagogue. He mentored students and facilitated workshops in ways that prioritized and cultivated their talent, skills, and individual pursuits. While many enrolled in the course to learn more about current world events through the lens of performance, they ultimately achieved a better understanding of their own ability to use theater as a tool to raise key sociopolitical questions.

Riad was a master storyteller. He conveyed histories not written, like when a well-regarded comedy film director chose not to follow a certain line of advice and instead wrote the version that was ultimately released. He spoke intimately of his contemporaries, including Zakaria Tamer, Saadallah Wannous, and other greats of the Syrian literary world, relaying their correspondences with great warmth and compassion. He interlocuted with so many artists and intellectuals — in Damascus and, in what would be the final chapter of his life, in Chicago — with an energy and sincerity that was uniquely his. For me, his stories capture a certain Damascene grandeur now lost to a decade of conflict, war, and exile. I am forever grateful for what we shared and look forward to what his legacy will continue to inspire.

Wendy Pearlman (Associate Professor in the Department of Political Science and a core faculty member of the MENA Program):

Riad had a one-of-a-kind combination of gifts: the creativity of an artist, the curiosity of an intellectual, the wisdom of a teacher, the cosmopolitanism of a citizen of the world, and the poise of a proud Syrian who never lost hope or sense of purpose, in spite of it all.

Riad enriched our community in so many ways. Beyond his teaching and the presentations he gave throughout the Chicagoland area, he was consistently one of the most active participants in other MENA programming. He was consistently a model of engagement — listening attentively, asking smart questions, and helping to foster a warm environment of exchange simply through his kind and thoughtful presence.

Riad was a loving husband and father. His wife Azzah and their children inspire with the same resilience, generosity, and poise that distinguished Riad. He will be sorely missed and I hope his beautiful family will remain a part of our MENA family for years to come.

Hendrik Spruyt (Norman Dwight Harris Professor of International Relations in the Department of Political Science and former Director of the Buffett Institute):

It is with immeasurable sadness that I heard of Riad Ismat’s passing. I got to know Riad in my capacity as Director of the Buffett Center [now the Buffett Institute] in 2012. Buffett at that time worked to bring scholars to Northwestern who were unable to carry out their work in their home countries and who were sometimes in outright physical danger. This “scholars at risk” initiative was supported by Trustee Mark Angelson, then Provost Dan Linzer, and the Scholar Rescue Fund.

When Riad’s name came up we quickly agreed that he would be most deserving of our support. His academic and diplomatic credentials were obvious to all. But even more fundamentally, his courage and integrity in breaking with the Assad regime were on full display. This made it imperative that he leave Syria.

Ever since his arrival with his wife, Azzah, and their three children, Riad graced us with his presence and he contributed to Northwestern as a generous colleague and a true intellectual in the classic sense. His dedicated work with students in theater, political science, communication, and other fields gave us a singular talent. Despite the hardships that came with the rushed exit from his homeland — the search for housing and teaching positions, the financial adjustments, and the ever-troubling INS — he remained gracious and friendly as ever, and always concerned with other people’s welfare.  As already noted by my colleagues, he continued to be prolific and creative despite these difficulties. Riad worked tirelessly to support his family, and I recall he was particularly proud when his son Karim graduated from UIC. We have lost a great scholar and an accomplished diplomat, but most of all we have lost a good man.

I took a class with Prof. Ismat my first year of graduate school. I was new to the theatre world, and for the first time I enrolled in a performance class. I felt, as you would say, out of my comfort zone. Prof. Ismat inspired us to create art from nothing. Even those inexperienced like me felt at ease expressing themselves. Prof. Ismat taught us the urgency of making art: even in the midst of an armed conflict, he showed us, art gives us the strength to carry on, to voice our distress, to imagine a better world. He led by example. Even as his beloved homeland, Syria, was engulfed in war, he continued to write and inspire others. I am cherishing this lesson especially now. Prof. Ismat will forever be a model of courage and empathy, and I am sure I speak for so many of his students when I say that I strive to live by his example.

My first encounter with Riad was at the Evanston Public Library. I had just started working at Northwestern. It was January of 2017. As I was leaving the library one afternoon, a poster for an upcoming event caught my eye. The event was Arthur Miller and Tennessee Williams in Damascus. That title spoke very directly to me, as someone with a strong interest in Syria and in the global circulation of writers, books, and ideas. I didn’t recognize the name of the speaker: Riad Ismat. I was intrigued and put the event in my calendar. Riad’s talk was an absolute tour de force. He discussed his adaptations of The Glass Menagerie (one of my all-time favorite plays) and A Streetcar Named Desire in Damascus and the enthusiastic reception of these plays in Syria. He talked about meeting Arthur Miller at the 1996 Salzburg Global Seminar. As he described it in an interview:

We had several conversations over the course of a week, and I attended rehearsals for his Death of a Salesman at the National Theater in London. I expressed to Mr. Miller my wish to adapt and direct his play The Crucible. He seemed positive and pleased after hearing how I had adapted Streetcar to base it in Damascus in the 1950s. I still wish to direct The Crucible because it’s an allegorical play about witch hunting, a synonym for the repression of innocent citizens in my region. It’s said that the accused are “innocent until proven guilty.” In my part of the world the accused are “guilty until proven innocent.”

In his library talk, Riad also mentioned meeting the Chilean playwright Ariel Dorfman in Salzburg, and later directing his play Death and the Maiden. I love that play and once interviewed Dorfman. When I got home from Riad’s library talk, I sent him an e-mail to let him know how much I loved it. I included a link to my interview with Dorfman. His response was warm, engaging, and generous — qualities he would display in all of our encounters and exchanges over the three years I was fortunate enough to have him as a colleague and friend. I always loved seeing him at our MENA Monday events, which he attended regularly. We often had brief but spirited chats before the lectures.

A couple years ago I attended a staged reading of Riad’s play Mihbaj, a sobering reckoning with the vexing fate of the Syrian uprising told through the divergent trajectories of three brothers. At the reception afterwards, he radiated with pride as he introduced me to his wife Azzah and his son Sami. It was a lovely and joyful occasion, albeit for a play about a colossal tragedy — one that changed the trajectory of Riad’s own life, and that of his family.

Riad was an old-fashioned Man of Letters. He was also a real mensch. My heart has been heavy since learning of his death. But it is also full of gratitude for his friendship.