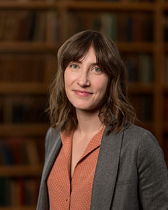 Rebecca C. Johnson (she/her/hers) is Director of the Middle East and North African Studies Program and Associate Professor of English at Northwestern. She is co-appointed in the Department of English and the Alice Kaplan Institute for the Humanities, and is a core faculty member of the Comparative Literary Studies Program. She serves as Associate Editor of the Journal of Arabic Literature.

Professor Johnson is a scholar of comparative literature with a specialization in modern Arabic literature and literary culture. Her research focuses on literary exchanges between Arabic and European languages in the 19th and 20th centuries, the history and theory of the novel, and studies of transnational literary circulation and translation. Her first book, Stranger Fictions: A History of the Novel in Arabic Translation, 1835-1913 (Cornell University Press, 2021), theorizes a cross-linguistic history of Arabic literary modernity by tracing the production and reception of translated fiction in the first decades of Middle Eastern novelistic production. Stranger Fictions argues for a new transnational history of the novel that places translation at its center, showing how Arabic translation techniques yielded sophisticated comments on the history and formal composition of the novel as a global genre, which was itself shaped by the inequalities that structure cross-cultural communications during the age of Empire.

Professor Johnson is now at work on "Visionary Politics: Revolutionary Transnationalism and the Aesthetics of the Arab Avant-Garde," which looks to the history of contemporary Arab literary styles since the 1960s. Similarly based on cross-linguistic exchanges, this book investigates experimental Arabic literature and art and their revolutionary attempts to envision alternative political futures throughout the decades-long transition from decolonization to globalization. Like Stranger Fictions, it focuses on transnational exchanges of ideas and aesthetic forms, showing the way that authors and artists conceptualized political futures and revolutionary visions across causes and conflicts that can otherwise appear distinct.

Professor Johnson has been a fellow of the American Council of Learned Societies, the Social Science Research Council, the Council for Library and Information Resources, the Fulbright Foundation, and the Alice Kaplan Institute for the Humanities. Her work has appeared (or is forthcoming in) NOVEL, Middle Eastern Literatures, Comparative Literature, The International Journal of Middle East Studies, Modern Language Quarterly, and Eighteenth Century: Theory and Interpretation. She has also published translations of Arabic literature; her translation with the author of Sinan Antoon's I'jaam: An Iraqi Rhapsody is available from City Lights Books.

Areas of Teaching and Research

Stranger Fictions: A History of the Novel in Arabic Translation  (Ithaca: Cornell University Press, forthcoming 2021)
Back to top